Back to the list
Total: 8 / 345 object(s)
« Magical gem: Horus on the lotus with animal triads (A) voces and logoi (B)
Magical gem: Anguipes (A) Harpocrates (B) »
Magical pendant: Harpocrates, ibis, Chnoubis (A) Ἀβρασάξ (B)

ower with two buds, which is placed upon a tall altar (Henig: naos?). The right hand of Horus is raised to his mouth, the left hand holds a flail. To the left of the altar, an ibis, to left, tied to one of the lotus buds with a cord; to the right of the altar, the lion-headed Chnoubis, also to left, head surrounded with a nimbus and five double rays. Around Harpocrates, animals, from left ro right: three crocodiles, a falcon, a crab(?), two  more falcons and two goats. Inscribed: ιαω?] → Ἰάω.
B: Inscription in two lines: α[- -]α|σαξ → Ἀβρασάξ.
Pierced at the top for suspension. A praxis known from a papyrus (PGM LXI 1-38) specifies that love charms had to be incised with the image of Horus on a lotus flower and the magical name Abraxas. Pieces with the Horus-scheme used as love charms: CBd-533, CBd-534, and this gem may also have been used as a love charm, although the representation of Chnoubis and the ibis tied to the altar suggests that it may also have had a digestive function. 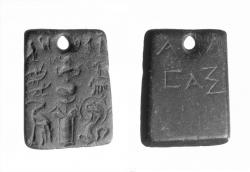 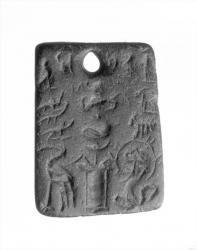 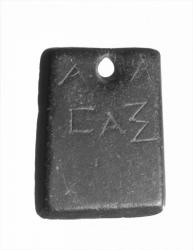