Drawing of a magical gem: Figures in three registers

Download PDF
CBd-Number:
CBd-2818
ID-Number:
Wu_Ex Chifletius–Macarius_XI 45
Collection:
Int_Whereabouts unknown
Inventory:
Chifletius–Macarius_XI 45
References:
Chifletius–Macarius, no. XI 45; Mastrocinque, SGG I, 355, no. 313
Former Collections:
Leopold Wilhelm of Austria, Archduke (1614–1662)
Material:
sard (brown)
Iconography:
throne; kline; Danubian riders (2); figure, jackal-headed?; figure, unidentified; bird: cock; animal: lion; fish; vessels, unspecified (2); gesture, greeting; clothing: tunic; head, of snake; snake; clothing: mantle; weapon: spears (2); gesture, lying; gesture, hand raised to mouth; gesture, arms outstretched; clothing: kilt
A: The field is divided into three registers. In the uppermost register: a figure sitting on a throne with open arms, wearing a long hooded garment. On both sides of the figure: riders facing towards each other, wearing armour and mantle, and holding a snake-topped spears. The throne is placed above a nude recumbent figure. In the central register: three figures in kline, wearing tunic, two with spears on their backs, left hand raised in greeting. To the left of the couch, a vessel and a well, to the right, a vessel, a fish and a lion, below the couch, a snake, a cock and a tripod. In the lowermost register, a jackal-headed figure to right, wearing a kilt, pointing to a standing figure on the right, wearing a mantle, with right hand raised to mouth, left hand lowered beside the body. Between the two figures: the head of a snake and a compass (?). Unidentified objects behind the two figures.
B: Insufficient information.

For a gem in the British Museum with somewhat similar design on side A, see CBd-686. 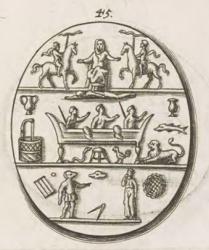