Obv. At l., lion headed god standing to r., nude but for kilt. A snake encircles his waist, its head against the l. side of his chest. Disk on head, which is encircled by a nimbus with seven double rays. From r. hand a twisted cord (?) hangs to ground. L. hand grasps the middle of a curious standard (?) just above the r. hand of an ass headed god (Set) who faces him. This figure also is nude except for the kilt; the maker may have meant to indicate a snake round the waist, but this is not certain. From Set's l. hand a twisted cord hangs to the ground. The two figures stand on a narrow base with crosshatching. At the middle of this base, between the feet of the two standing figures is a hemisphere with a star on each side; from it rises the main stem of the previously mentioned standard, which widens slightly from bottom to top and is cross hatched like the base. At the top is a circle enclosing a star. Below the hands of the two gods the upright standard forms the axis of a rhomboid figure, the broad angles of which are formed with double lines cross hatched between.
Rev. The seven vowels in " pyramid " sequence, one alpha, two epsilons, and so on to seven omegas.
Haematite in silver mounting. Upright oval, 27 x 23. Better work than most stones of this class. The lion headed god is evidently a solar deity, probably Horus (see Budge, Gods, II, p. 360; Lanzone, Dizionario di Mitologia Egizia, Pl. 244, 1); but in the period when these amulets were made, Horus and Set were usually represented as enemies, since they so appear in the cycle of Osiris legends. In much earlier times certain legends treat them as allies (Erman, Religion der Ägypter, p. 37; Budge, Gods, II, pp. 241-244); thus they join in pouring life over Seti I (Budge, II, p. 248, plate), and in holding the ladder of heaven (Budge, I, p. 490; II, p. 242). It seems scarcely likely that the gem under discussion could have been suggested by some ancient representation of the latter scene, but the possibility should perhaps be mentioned. As far as I know, all dynastic representations of Horus with Set show the former as human headed or hawk headed, not with the head of a lion.
Last modified: 2011-11-06 15:06:01
Link: cbd.mfab.hu/pandecta/885 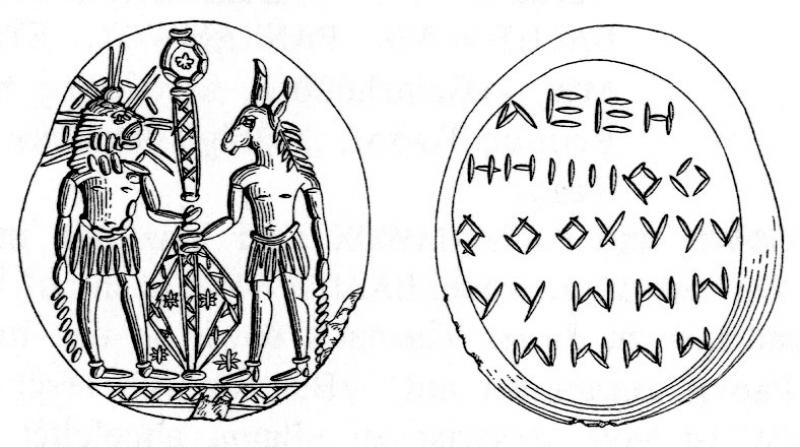