Obv. Above, a group of two gods. One, apparently meant for Zeus, is bearded, and stands to front before a throne, head to l., thunderbolt in r. hand, l. resting on arm of throne. Garment wrapped round body from waist to ankles. Behind him, and slightly leaning over his shoulder, a beardless god of slighter build, nude but for a kilt, holding a hammer over his shoulder. At each side of the group a roaring lion faces outward. In the exergue, which occupies almost half the surface, two birds, apparently eagles, stand to r. and l., their heads turned back towards each other. At bottom an indistinct human head set between spread wings; upper part of a siren?
Rev. Four non Greek characters.
Chalcedony. Upright oval, 15 x 12.
The group might be taken to represent Zeus and Hephaistos, the latter here conceived as a youth; but it is more likely that the engraver had in mind the Kabeiroi, the elder identified with Zeus. For this identification see Kern in PW, s. v. Kabeiros, 1426, and Schol. Αpoll. Rhod. 1, 916-918 b; also B. Hemberg, Die Kabiren (Uppsala, 1950), p. 262. For the younger figure, compare the Kabeiros shown in SMA, Pl. 4, No. 70 /CBd-1684/.
Last modified: 2016-05-23 23:58:14
Link: cbd.mfab.hu/pandecta/888 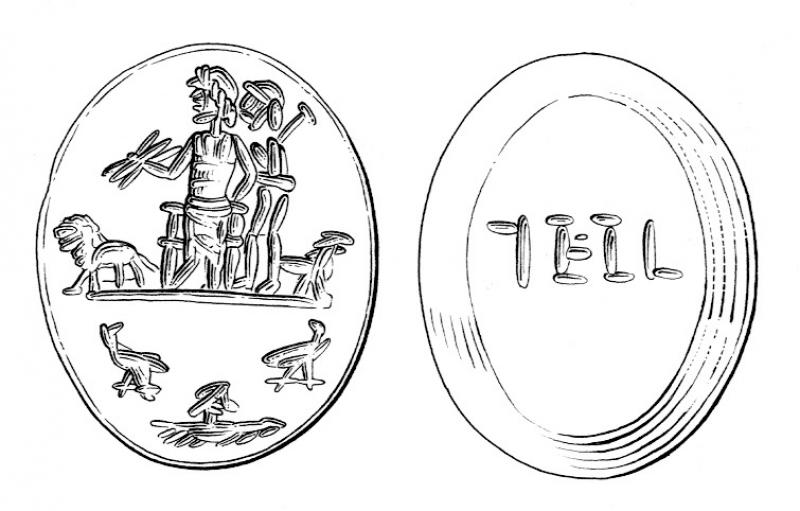 CBd-660
Magical gem: Zeus and Hephaistos (A) Pseudo-Hebrew inscription (B)
2.