Magical gem: Hermes and Anubis (A) characteres and symbols (B)

A: Ouroboros frame. Hermes and Anubis standing opposite each other, both in kilts. Between them, a stud consisting of two metals (cupper and bronze?). Hermes wears a cap with small wings, he is holding stalks of grain in his right hand, and a falcon-sceptre in his left hand. The jackal-headed Anubis is holding a jug in his right hand and a burning torch in his left hand. Between the gods, at the height of the legs: ιαω|φερεν|φερω → Ἰάω φέρ’ ἕν φέρω. 'Ἰάω fetch one, I am fetching it.'
B: Three lines of characteres as well as planetary and zodiacal symbols (Taurus, Saturnus, Sagittarius, Sol and Leo).

The gem may have been carved after the drawing of a cast in Chifletius–Macarius, Abrasax, see CBd-2819. For a similar gem in Staatliches Museum Ägyptischer Kunst in Munich, see CBd-323.
Another copy: Devoto–Molayem 1990, 204 fig. 122 (Michel).

Notes Side A and B 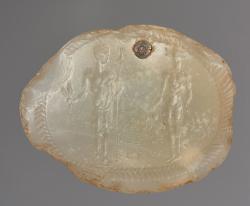 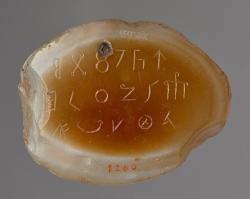