A: Part of an Ouroboros, enclosing the represantation of Sarapis enthroned, holding a tall scepter in his left hand. Above the head of Sarapis, perhaps traces of a scarab with outstretched wings (cf. CBd-663). The throne of Sarapis rests on the back of a crocodile, facing left. Below the crocodile: mummy (Osiris?) lying head to left, carried by a lion walking also left. Inscription below the lion: ιαω → Ἰάω, rests of an inscription outside the Ouroboros. In the free field to the right of Sarapis, a small lying crescent, and an eight-pointed star above it. Below: inscription in seven lines: αεηιουω|εηιουω|ηιουω|ιουω|ουω||υω|ω → The Greek vowel series in pterygoma form. Greek letters around the edge, outside the Ouroboros: [---]εν[---] → Ἰαεω-palindrome, cf. CBd-663.
B: Horus sitting nude, with knees drawn up, on a lotus flower with two buds represented on a baseline indicating the primeval mound(?). Head turned left and crowned with a solar disk, side-lock of youth visible. Right hand raised to mouth, left hand holding a flail. Beside the head, on the left: an eight-pointed star, on the right: a crescent. To the left of Harpocrates, two smaller figures: Aphrodite wearing himation, and touching her hair with her left hand; and Ares wearing a helmet and holding a shield in his left hand. To the right of Harpocrates Hecate trimorph clad in peplos and kolpos, her three right arms holding whip (lowermost), a burning torch (middle), and dagger (uppermost). Inscription at the top in three lines: αβλ[..]|αθανα[...] → αβ[αν]ναθανα[λβα], |αρρω[.] - at the bottom in two lines, to the left of the lotus flower: ιφρ|[.]σισ → αρρω[ρ]ιφρ[α]σις. To the right of the lotus flower, in three lines: [.....]|ωω|ωχ → [Βαϊνχ]ωωωχ.
C: Remains of an inscription running around the edge: .ζηδια...ξκωα.. → unidentified voces.
Based on similar representations, in which Sarapis leans on a scepter with an ibis at the top, and a passage in the Greek Magical Papyri (PGM V 446ff.), S. Michel raises the possibility of Sarapis being identified with Thoth, also mentioning the deity’s possible identification with Zeus/Hades and Kronos. On the other hand, the representation of Harpocrates on a lotus flower connects the gem with love charms. A praxis known from a papyrus (PGM LXI 1-38) specifies that love charms had to be incised with the image of Horus on a lotus flower and the magical name Abraxas. Pieces with the Horus-scheme used as love charms: CBd-533, CBd-534. The connection here is further reinforced by the representation of Aphrodite and Ares. 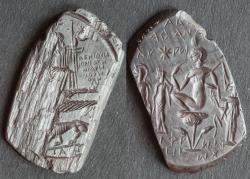 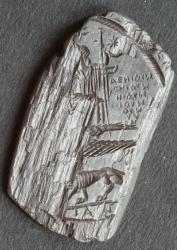 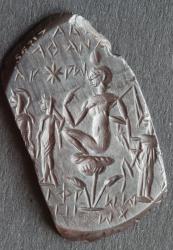 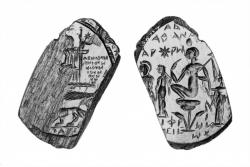 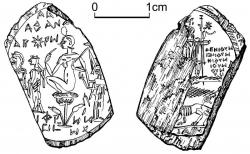 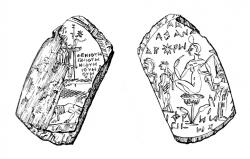