THE CURSE OF EVE

There is a large group of obviously magical amulets that present, amid many variations, one constant feature, a very curious one. It has the appearance of a large vessel occupying the center or, more frequently, the lower third of the field. It looks like a big-bellied pot, which in almost all the known specimens has the mouth downward. Sometimes it is represented as almost globular, sometimes it is a more or less flattened spheroid, and again its outline is sometimes a broad oval. A short neck is often, but not always, indicated; but it never has a base or foot — a point worth noting, since the only kind of vessel made with a broad bottom and without a foot would be a cooking pot or cauldron.1

This vessel has several peculiarities. From the highest point of its upturned bottom a horizontal or slightly curving line or streamer extends outward on each side to the limit of the field. In many specimens two shorter straight or slightly wavy lines extend horizontally or at a slight downward slant from each side of the neck. Below the mouth of the vessel, and of equal horizontal extent with it, is a parallelogram, usually rather narrow, crossed by several vertical bars so that it looks like a grating; and connecting with the bottom line of this parallelogram is something that closely resembles the crank of a winch. It has a fairly long arm and a horizontal grip or else a knoblike handle. In the upper part of the field, standing on the long horizontal streamers or even on the vessel itself, are two or more deities — usually three or four — among whom, on different specimens, one may recognize Isis, Harpocrates, Osiris, Anubis (the last two regularly in mummy form), Chnoubis, Nephthys, Bes, and occasionally other deities. In a great majority of the specimens the design is accompanied by the inscription Ορωριουθ, usually cut on the reverse of the stone, only rarely on the obverse.

This description, which must, of course, be supplemented by the illustrations, gives an adequate idea of the great majority of the amulets belonging to this group (D. 129–143). The design is simplified in the smaller and cheaper specimens, especially by omitting the deities in the upper field; sometimes nothing but the characteristic vessel remains. On the other hand, there are a few elaborate specimens which contain added elements; these give useful help to the understanding of the design. 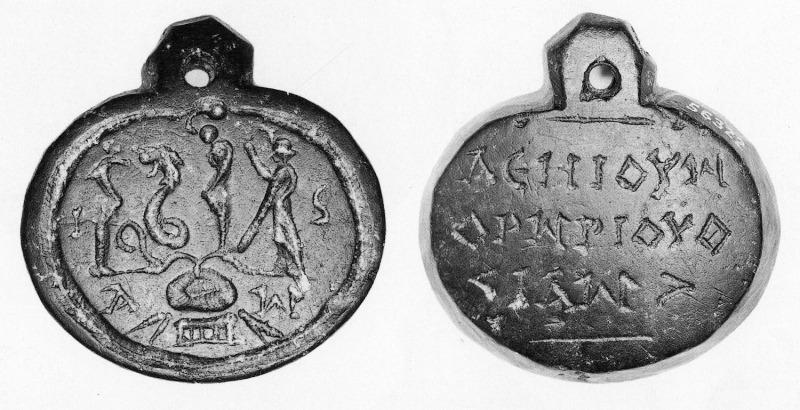 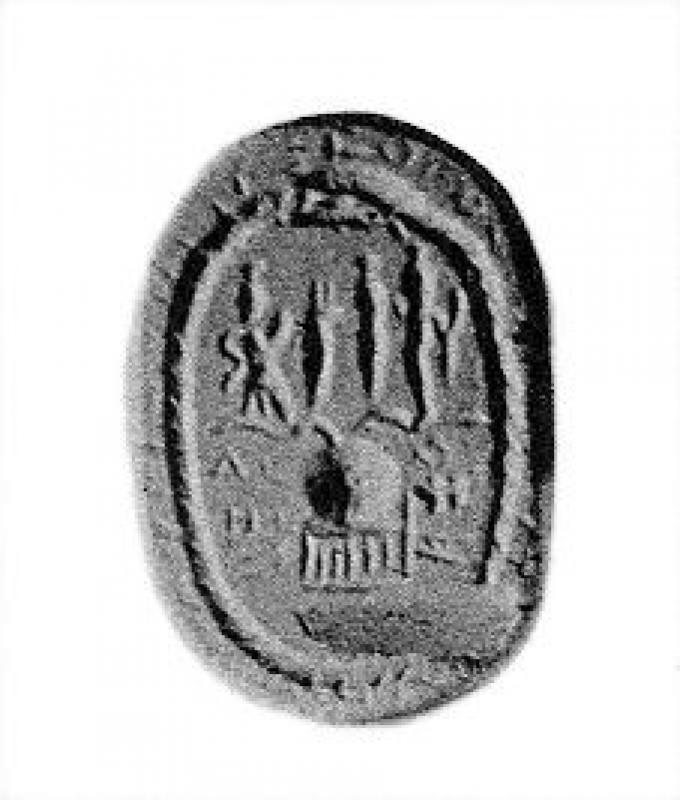 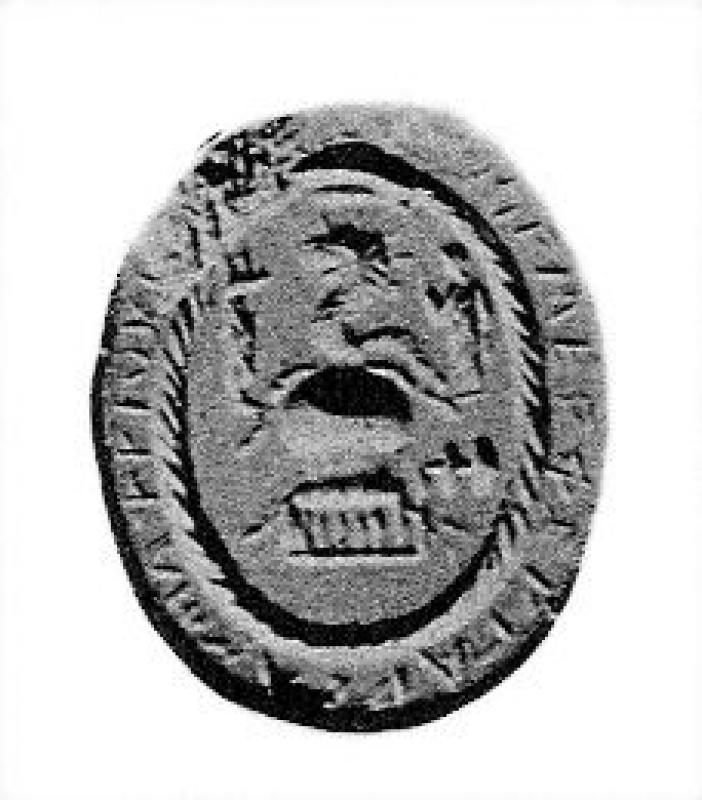 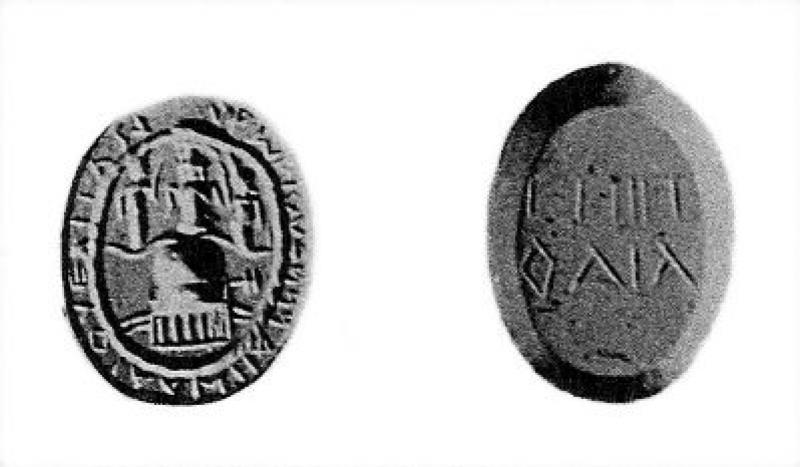 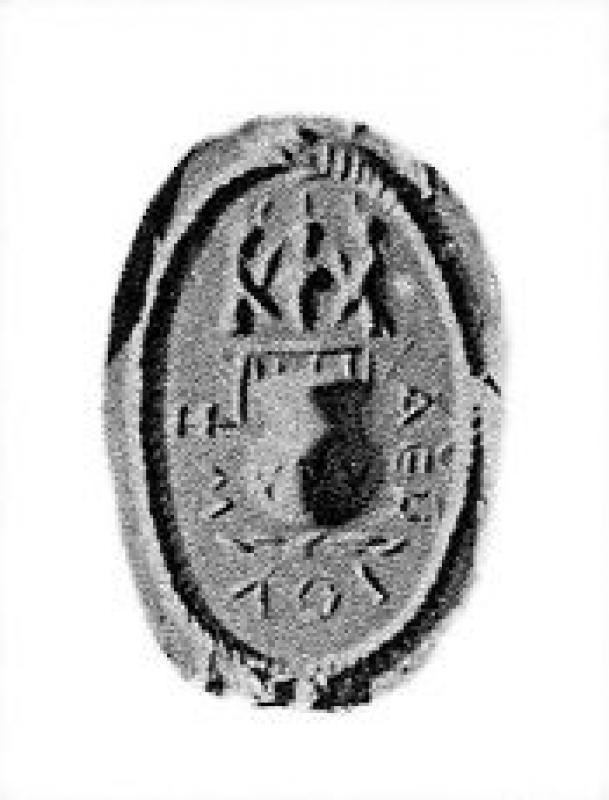 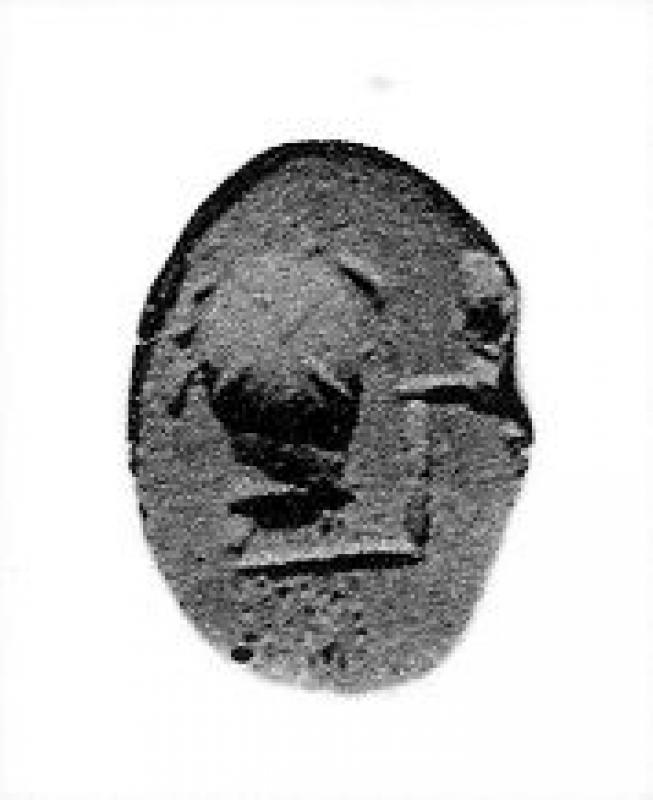 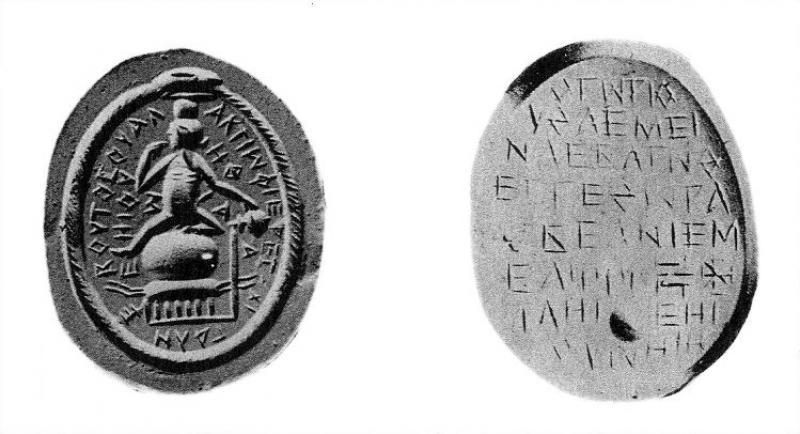 CBd-1055
Magical gem: Harpocrates sitting on uterus (A) inscription (B)
9. 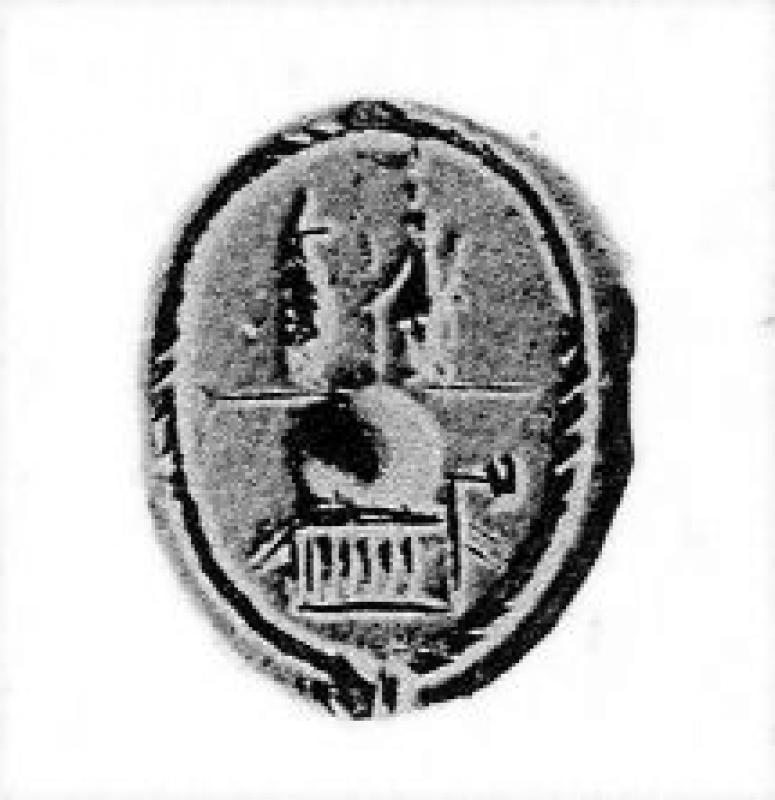 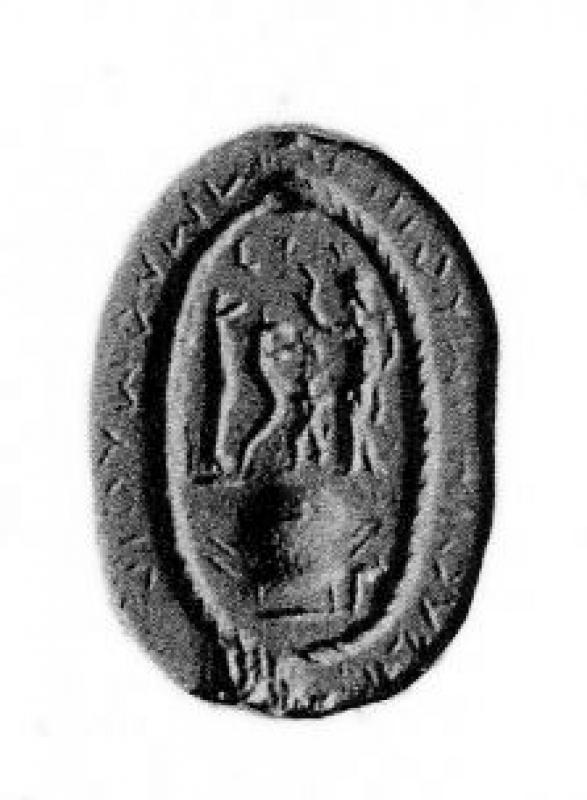 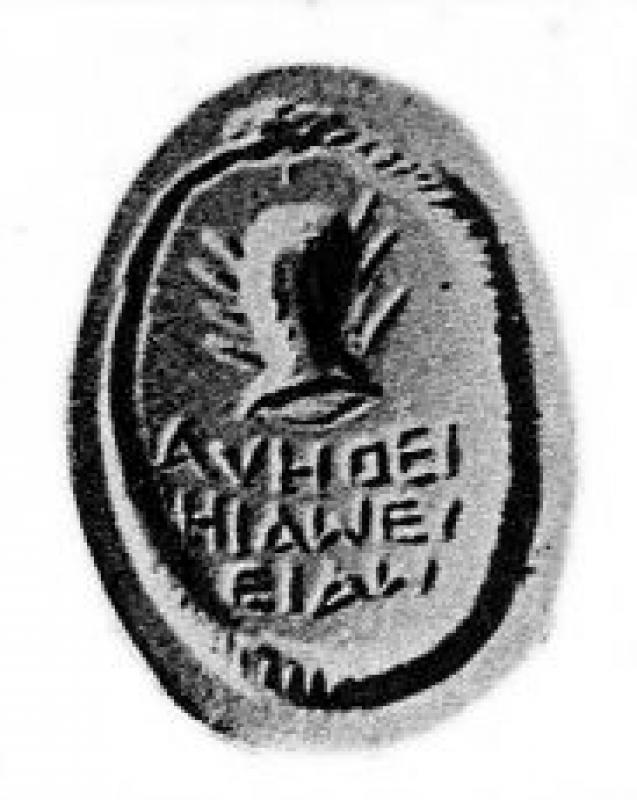 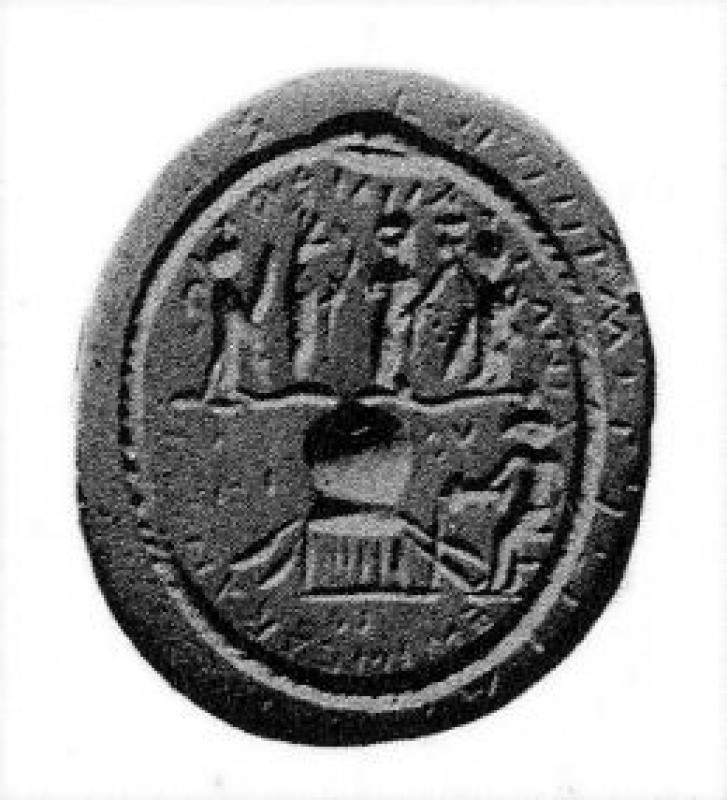 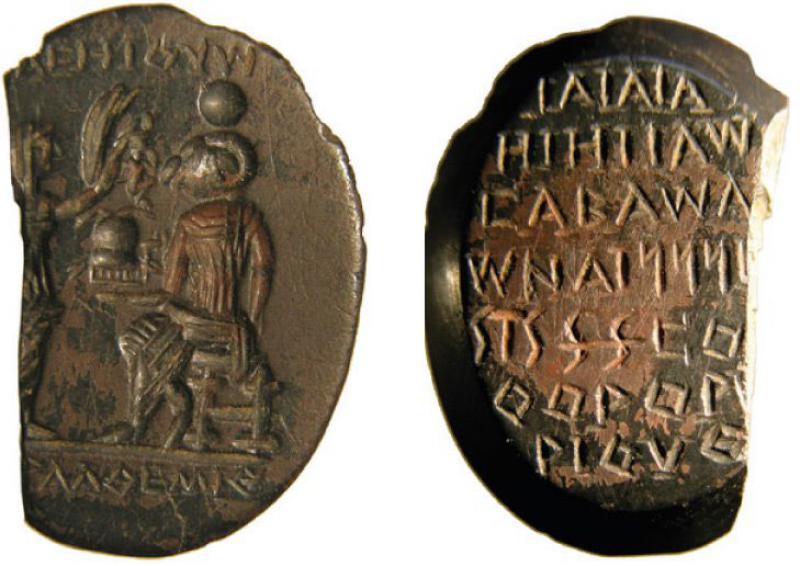