Zwierlein-Diehl 2013, comm. ad Bonner, SMA: The Post-Antique History of Magical Gems
Magical Gems in the Medieval and Early-Modern Periods: Tradition, Transformation, Innovation.
Bonner in SMA did not write a chapter on the afterlife of magical gems, but he mentions some early-modern copies. Discussing the class known today as "uterus-amulets" he writes (p. 80f.): "Strangely enough, the first recorded approach to an understanding of this type was right, although, paradoxical as it may seem, the interpretation was set forth in connection with a stupid forgery, not a genuine specimen." This refers to the famous gem with a winged uterus on an altar given by Nicholas Claude Fabri de Peiresc to Peter Paul Rubens in 1623 (CBd-2187(2187). Bonner further remarks: "A more careful comparison of the stone that he presented to Rubens with those in his own collection might perhaps have shown him the spurious character of the former; but he seems to have been singularly unsuspicious, although certain incredible designs on the plates of Chiflet and Capello show clearly enough that spurious gems were no rarity at that period." Ad D 173 he states: "The present example is a forgery, almost certainly modeled on the illustration in Chiflet pl. 3, 14, reproduced in Montfaucon, II 2 pl. 146, 4". Ad D 221(CBd-469 pp.147, 290 a haematite with the "Canopus" figure in his collection, refering to the opinion of B. H. Stricker "...that the gems may actually have been meant to represent the scene described by Rufinus ", he concludes: "In that case and probably in any event, all the "Canopus" gems shown by Kircher, Chiflet, Capello, and Montfaucon are to be regarded as early modern forgeries". He confirms this opinion in Bonner 1951, 307. Panofsky 1961 and Michel, DMG agree. Mastrocinque 2000 votes for a date of 2nd–3rd century AD.

In his supplementary C. Bonner, 'Amulets Chiefly in the British Museum,' Hesperia 20 /1951/, 301-345">1951 article Bonner discusses "Ancient Replicas and Modern Imitations". Group B: A red jasper in the CdM (CBd-2189) is very probably identical with the "Heliotropium" in possession of Thomas le Cointe, published by Chifletius – Macarius, Abraxas pl. 23, 94. Two stones in the British Museum are modern copies of Chifletius' plate (CBd-969, CBd-970). Bonner notes the relation of the obverse of CBd-970 to pl. 19, 78. He assumes that "It probably represents some Renissance scholar’s conception of a Gnostic 'universal father’ with a group of cosmic spirits dancing on the celestial sphere". Strange to say he does not mention the original of this plate also in the British Museum (CBd-968, see below). Group C: A chalcedony now in Vienna (no. 63=CBd-2188), at the time in the collection of Archduke Leopold Wilhelm of Austria (1614–1662), was first published by Chifletius – Macarius, Abraxas pl. 17, 69. Bonner lists three copies after Chifletius' engraving, mentioned earlier by King, Gnostics, 289–290, one in the British Museum (no. 64=CBd-981). There is now a fourth copy in the British Museum bought in 1986 (CBd-982). Group D (nos. 65–68=CBd-1005) comprises four examples of the Anguipes-Chnoubis-group. Bonner expresses serious doubts about their genuiness. Michel, BM ad no. 646 adds two more pieces, dating the group to the 18th century. A further addition: CBd-3. Bonner's last group E consists of three unrelated pieces. CBd-988 according to him is a copy of the original figured by Chifletius – Macarius, Abraxas pl. 9, 35, a haematite in the possession of Philippe Chifflet (1597–1657), the brother of the author. Michel is of the opinion that the copy was made after the engraving. CBd-983 is related to Chifletius – Macarius, Abraxas pl. 6, 24, a haematite from the collection of Archduke Leopold Wilhelm of Austria, now in Vienna (CBd-2190), but differs in some points, the most conspicuous being the retrograde inscription on the reverse. Bonner supposes, that the maker of the London carnelian had before him the original of Chifflet’s cut, whereas Michel supposes he had a cast. Considering CBd-684 Bonner, despite his doubts, reckons with the possibility that the reverse with a female griffin might be genuin. Michel affirms the modern origin of the whole gem.
Bibliography
Stange, Arnoldus Saxo
Thomas Cantimpratensis, Liber de natura rerum, 354-374.
, vol II 4, p. 210-244.
Albertus Magnus, De mineralibus /ed. Borgnet/, vol. V, 1–57.
Chifletius – Macarius, Abraxas
Capello 1702

Bonner treated the pieces discussed by him in 1950 and 1951 as forgeries, and that is what they are from the viewpoint of the modern scholar. But the desire to distinguish clearly between genuine and fake developed only slowly during the 18th century. A copy or variation may have been a strong amulet or a scholarly interpretation in Renaissance times. So a more differentiated approach should be attempted.

In a paper presented at Fribourg in 2011 I have sketched three major aspects of the afterlife of magical gems. The first one, "Tradition", discusses the theme of continuity, that is, the preservation of magical gems and their use as seals and amulets or as decoration of reliquaries and crosses in medieval times (CBd-1230, CBd-1570). Beyond that, faith in the power of stones was transmitted by lapidaries from antiquity to the Medieval period and beyond. "Transformation" deals with the phenomenon of medieval re-interpretation of magical gems as lucky charms based on the action of the figures, their different parts and attributes, once knowledge of the ancient meaning of magical images had been lost. There are two types of medieval lapidaries of engraved stones. The first is an astrological lapidary represented in varying forms by Arnoldus Saxo (Stange 75–77) in about 1240 AD, Thomas of Cantimpré (14, 69) in 1241 AD and Albertus Magnus (2, 3, 5) in 1248–52 AD. This lapidary is devoted to the planets, the signs of the zodiac and other constellations. Although most of the figures described can be found on Roman gems, some seem to be influenced by medieval representations. Jupiter, however, is not the enthroned god holding scepter and eagle we find on Roman gems, but a man with the head of a ram. This detail may refer to magical gems showing Khnum, who has the head of a ram CBd-717, CBd-1036, CBd-1974, CBd-1950. Such a stone is said to make the wearer beloved by all men and animals. The second type of medieval lapidary of engraved stones claims to present gems made by the Jews during their passage through the desert. It is said to have been written by a Jewish philosopher of the name "Techel", the name occuring in several variants. This lapidary contains several magical images. For instance No. 1 in Thomas of Cantimpré (14, 70, 8–10 no. 1), despite the clumsy description, is recognisable as the figure of the Anguipes. The power ascribed to such a gem is protection against all enemies. That is why even bishops (CBd-1570) and kings wore such an amulet. We may infer that the bellicose aspects of the figure represent aid against enemies.
"Innovation" came about in the Renaissance when, in the absence of a continuing tradition of genuine understanding, scholars made a new attempt to interpret magical gems on the base of the knowledge available to them. Scholarly interest in magical gems, combined with an unbroken belief in the powers of these amulets, produced copies as well as new types. The first scholarly discussion was the illustrated "Abraxas Proteus..." by Ioannes Chifletius (Jean-Jacques Chifflet, 1588–1660), first published in 1657, which was bound with the earlier essay "Abraxas, seu Apistopistus..." by the now deceased Ioannes Macarius (Jean l’Heureux, c. 1550–1614). Macarius first describes a gem found during the twenty years he was in Rome. The obverse bears the figure of the snake-legged god and the reverse the inscription "Abraxas" (probably, as is mostly the case on these gems, in the Greek form "Abrasax"). On consulting the Church Fathers, above all Jerome, in Amos I 3, 9–10 (Corp. Christ. Lat. 76, 250), he found that this was the name given to God Almighty by the followers of the Gnostic sect founded by Basilides in the 2nd century AD. According to Basilides, there are 365 heavens, in accordance with the number of days of the year; the name Abrasax is the isopsephic equivalent, the numerical value of the Greek letters being 365 (as Chifletius demonstrates in the diagram on p. 66). So Macarius, and consequently Chifletius, concluded that Abrasax was the name of the snake-legged being, that this was the image of the Highest God of the Basilidians and that the magical gems were amulets of the Basilidians (Chifletius – Macarius, Abraxas 9–11, 62–66).

Most copies offer variations or amplifications of their models. A late Hellenistic cameo-fragment in Vienna shows Harpocrates as a baby without attributes, sitting on a lotus, of which only the upper rim is preserved. During the Renaissance, the reverse was engraved with what amounts to an interpretation of the obverse, that is Harpocrates sitting on the lotus in the scheme of the magical gems, accompanied by a highly learned inscription (CBd-1975).
The obverse of Chifletius – Macarius, Abraxas 121–22, pl. 19, 76 was apparently inspired by Chnoubis gems showing the body of the snake ending not in the usual complicated curlicue but in a slight curl (e.g. CBd-714). In place of the lion’s head there is a frontal human face. The drawing is made after an impression in the possession of Claudius Salmasius (Claude de Saumaise, 1588–1653), published by himself in 1648: Cl. Salmasii, De Annis Climacteriis et Antiqua Astrologia Diatribae (Leiden, Elzevir 1648) 570–1 (with figs.). So the gem was engraved before 1648, probably in the first half of the 17th century AD or even earlier. The inscriptions are copied from ancient magical gems with some mistakes including the "new" name ΧΟΛΧΝΟΥΒΙC, a false reading of XPAXNOYMIC. There exist several copies made on the basis of Chifletius’ image (see Michel, BM ad Nr. 617; CBd-2159).
The gem engraver of Rubens’ winged uterus-amulet, though inspired by ancient uterus-amulets, creates a new type (CBd-2187). Rubens also possessed a red jasper with standing Jupiter with a ram’s head, holding sceptre and thunderbolt (CBd-2160). Here an early 17th century gem-cutter has realised what the lapidaries describe as a powerful amulet (see above). An early example of a newly-created magical gem is a large chalcedony-agate in Vienna with Hermes and Anubis in an Ouroboros-frame (CBd-2191). The obverses of a prase in Vienna (CBd-2192)  and a heliotrope in Chifletius’ possession (Chifletius – Macarius, Abraxas, pl. 19, 78), now in the British Museum (CBd-968) are derived from the same model. Copies of Chifletius’ image: CBd-970, CBd-971. According to Chifletius, the crowned god is the Father of the universe adored by angels, the herm-shape (terminus) expressing utmost tranquility. He tries to connect this with the thought of Gnostics such as Basilides. Alphons Barb may be right in suggesting that the source of the idea is Psalm 99, 1: Dominus regnavit ... qui sedet super Cherubim. The reverse of Chifletius’ heliotrope bears the figure of the herm-like god alone. This image was invented before 1616, probably in the 16th century, since we find it on a moss agate from the collection of Paulus Praun (1548–1616) (CBd-973).
These last examples demonstrate that co-operation between scholars and gem-engravers evidently stimulated the production of novel amulets. Images and inscriptions in these cases are inspired by ancient magical gems but do not exactly copy them. They are new types prompted as well by literary sources.
Last modified: 2017-10-02 22:33:06
Link: cbd.mfab.hu/pandecta/2330 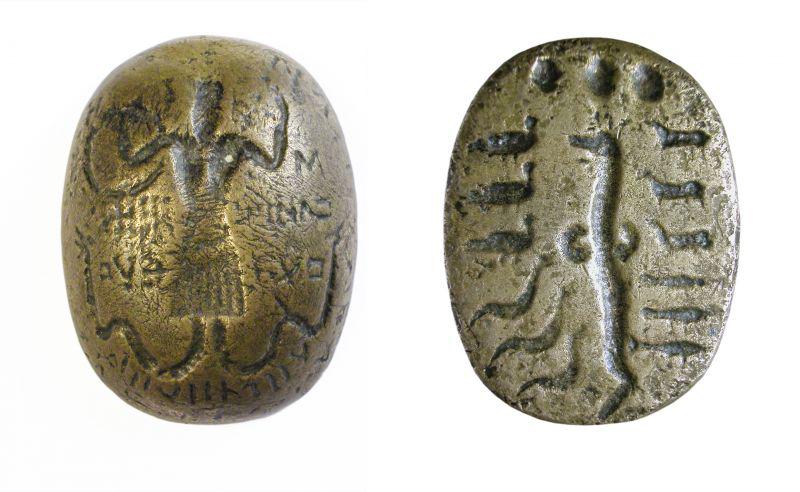 CBd-3
Magical gem: Chnoubis with triads of animals (A) Anguipes (B)
2. 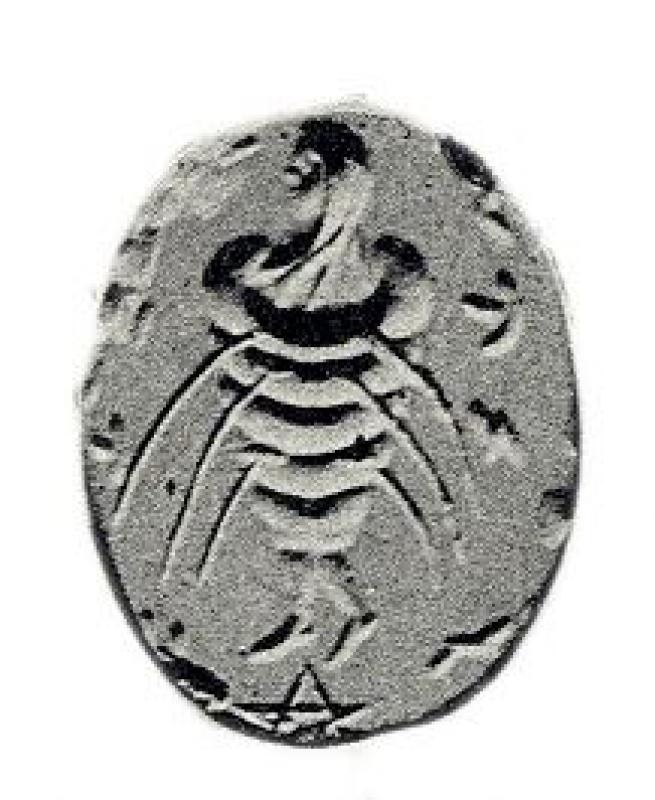 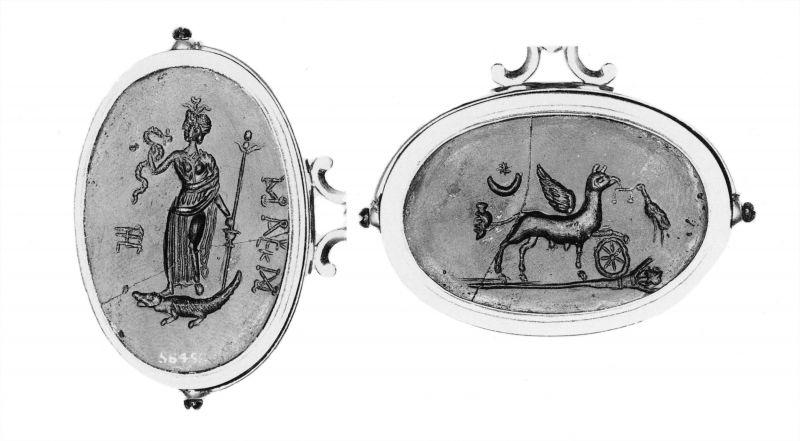 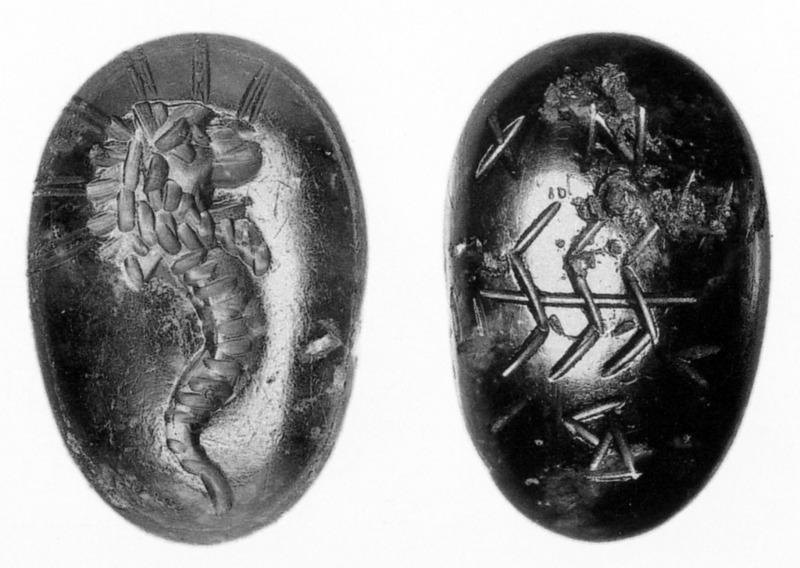 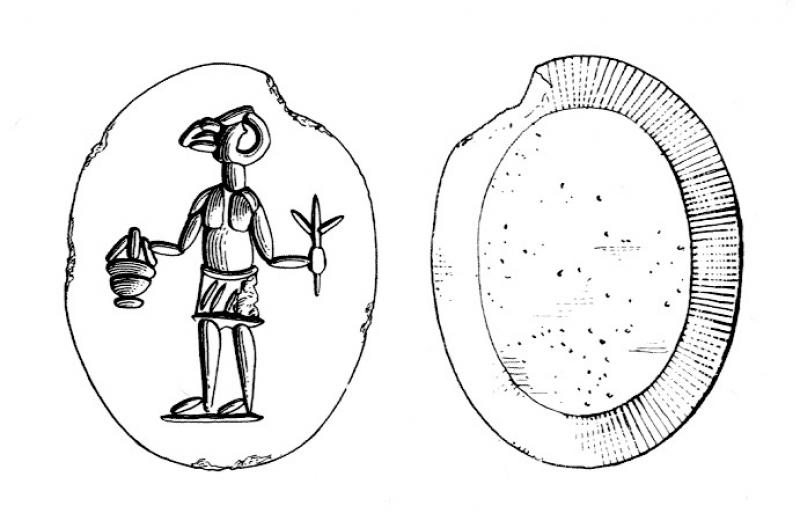 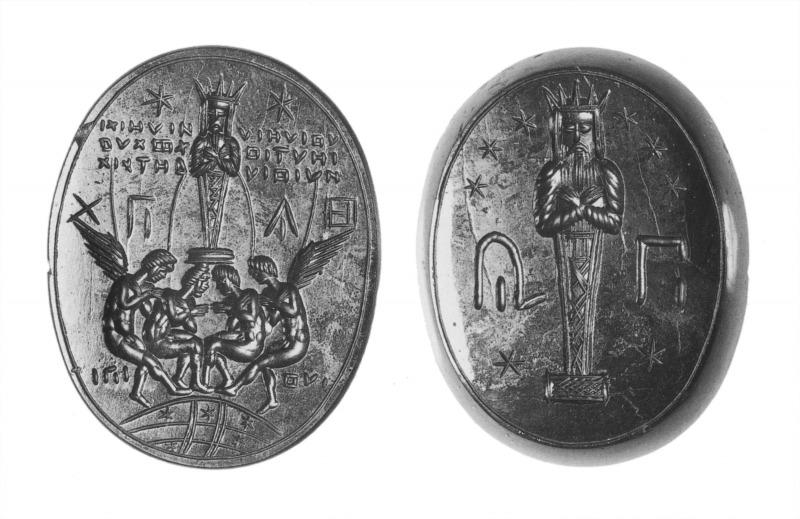 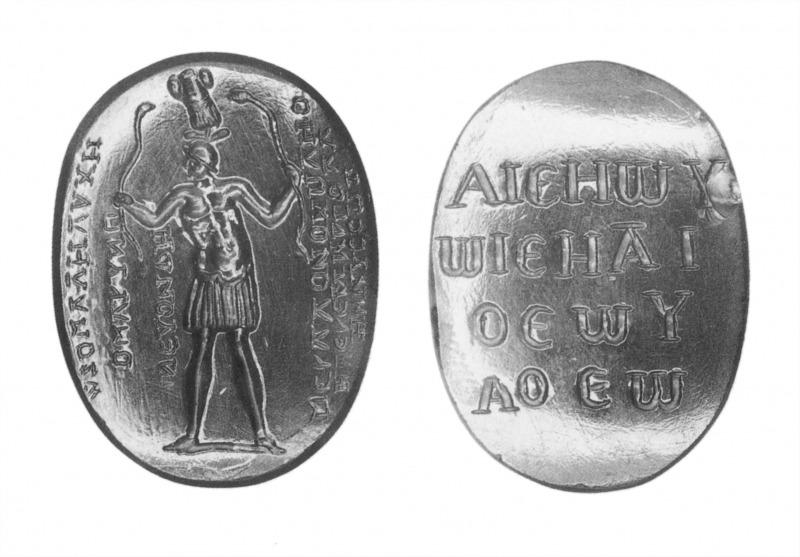 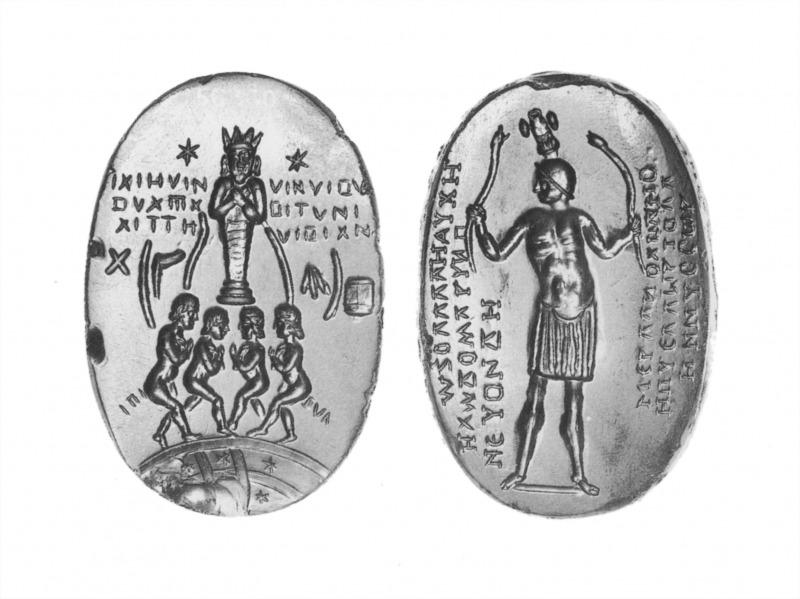 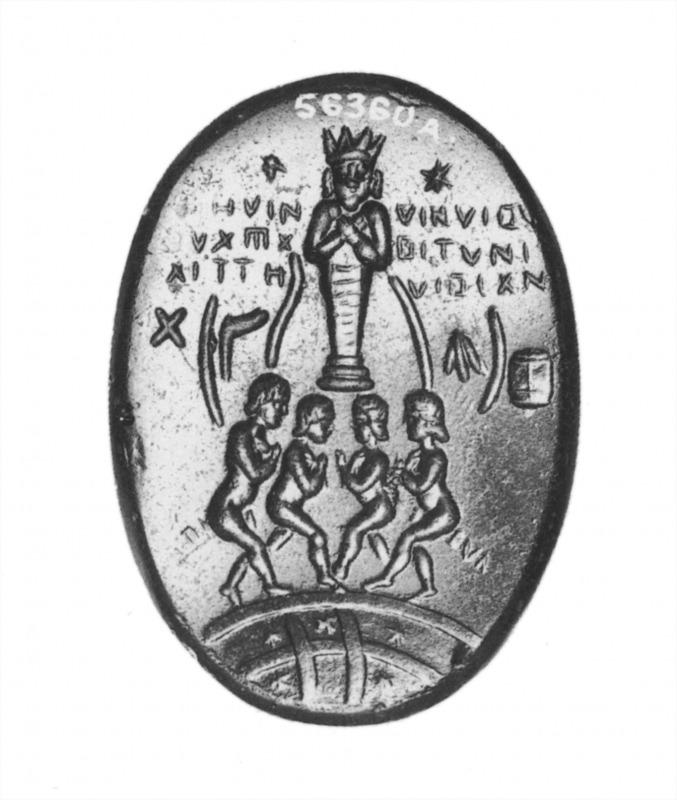 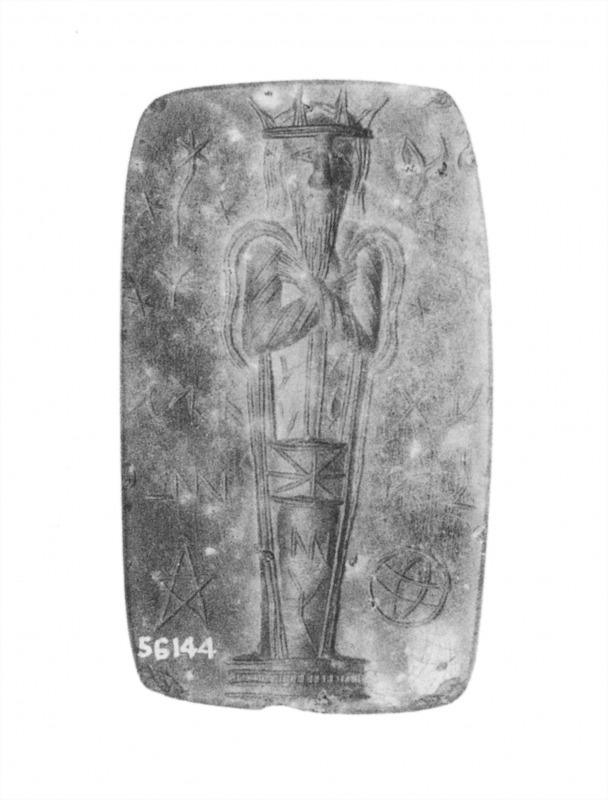 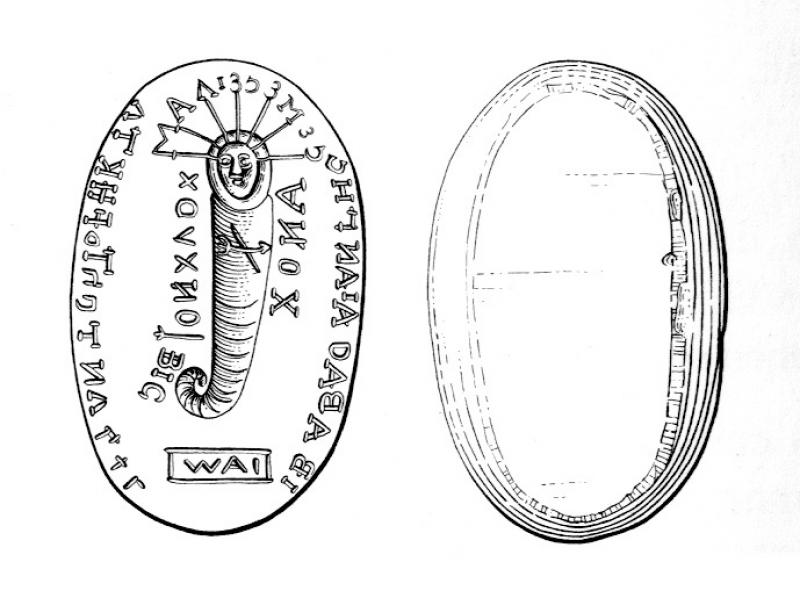 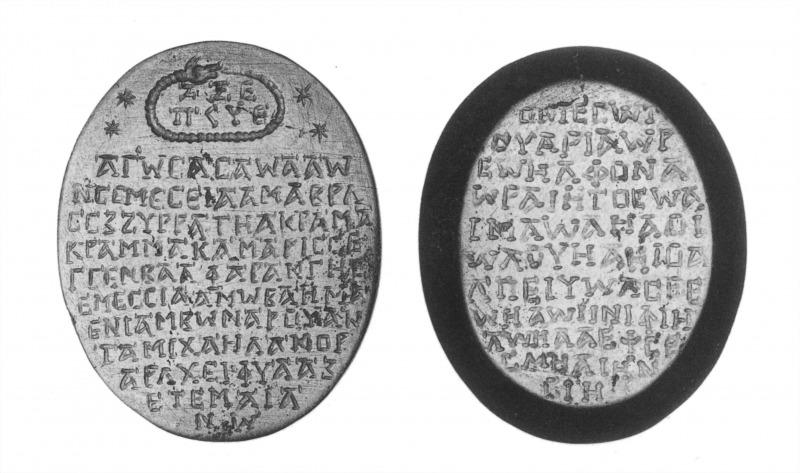 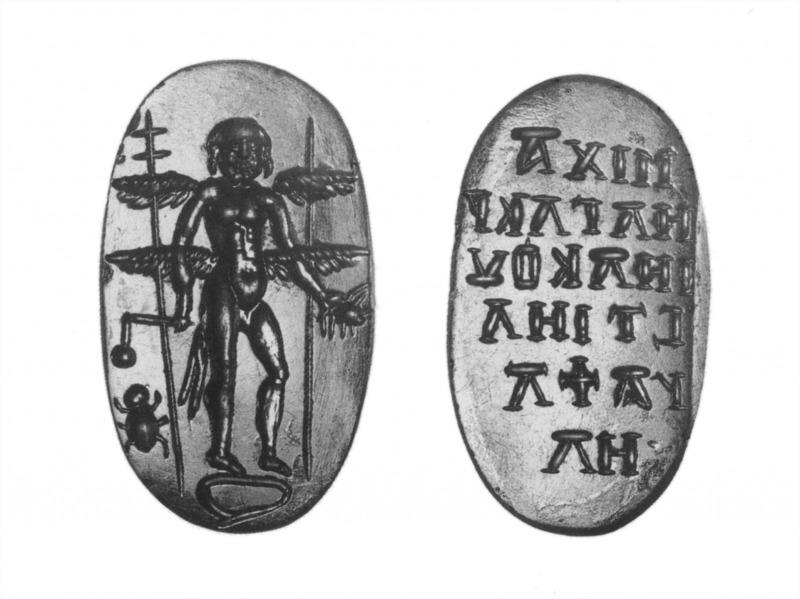 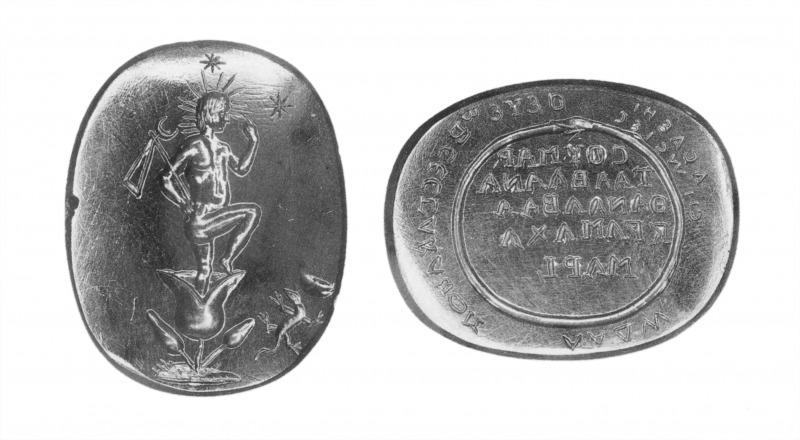 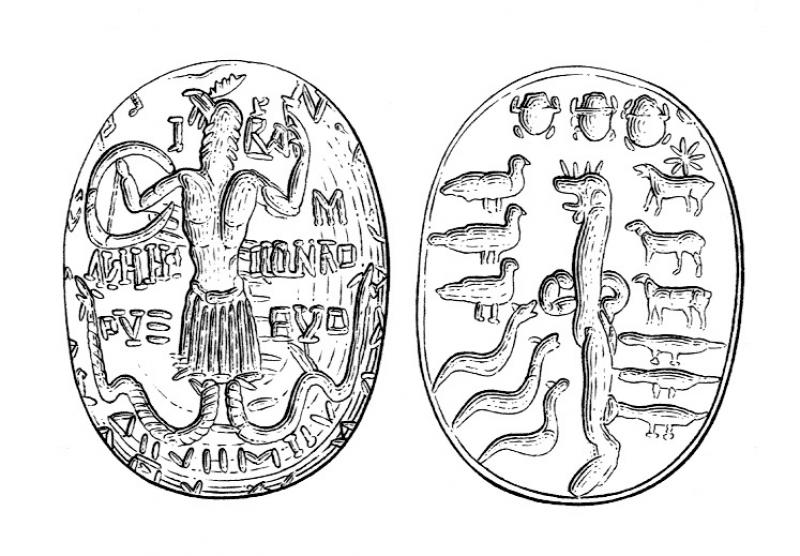 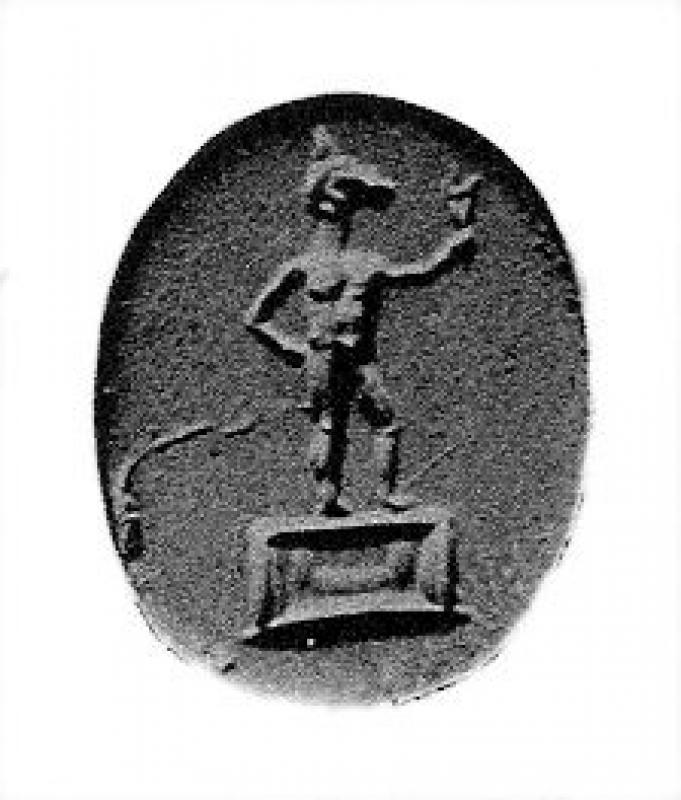 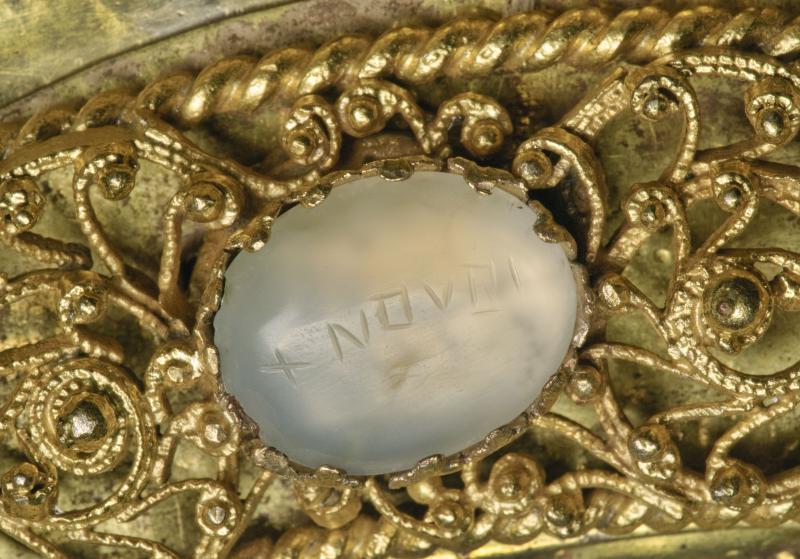 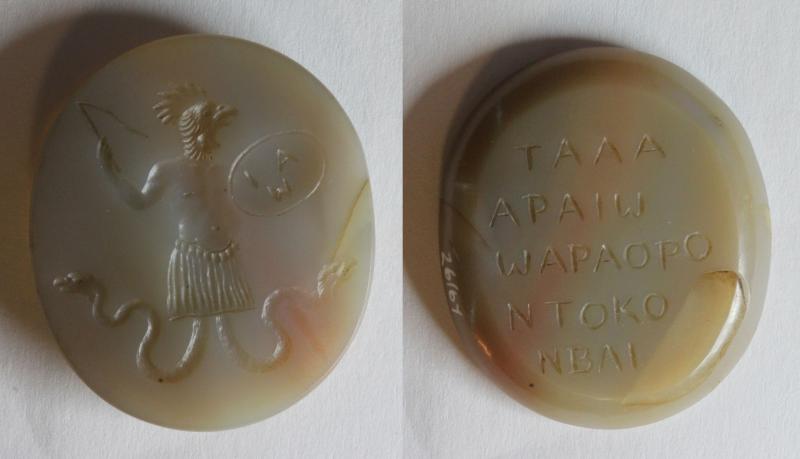 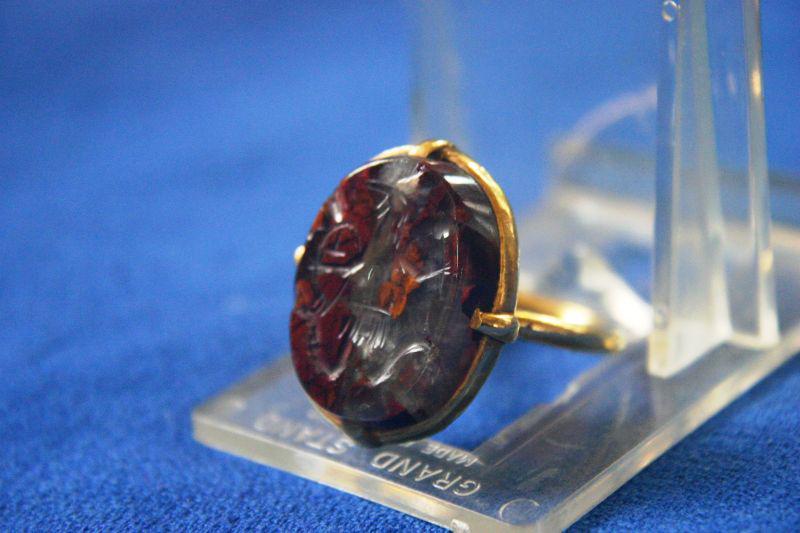 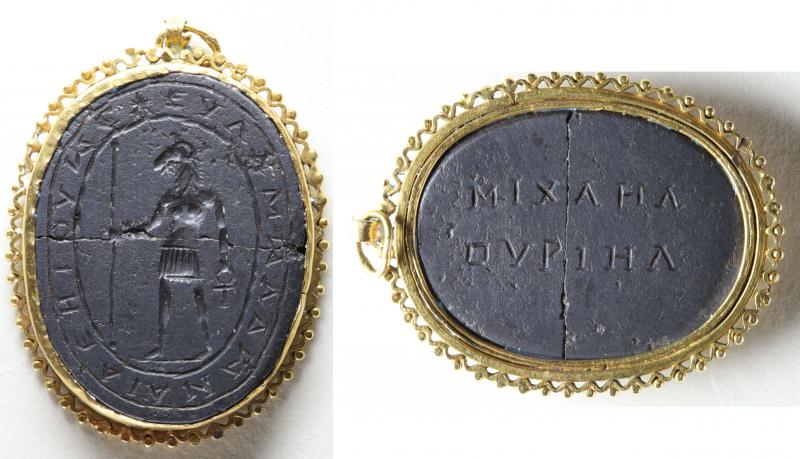 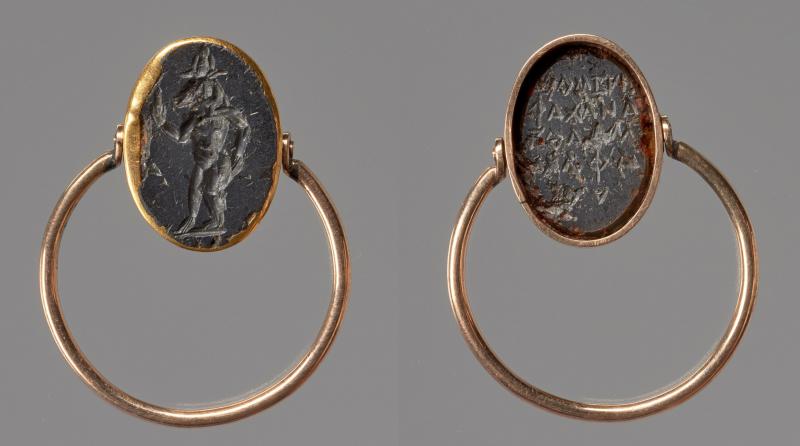 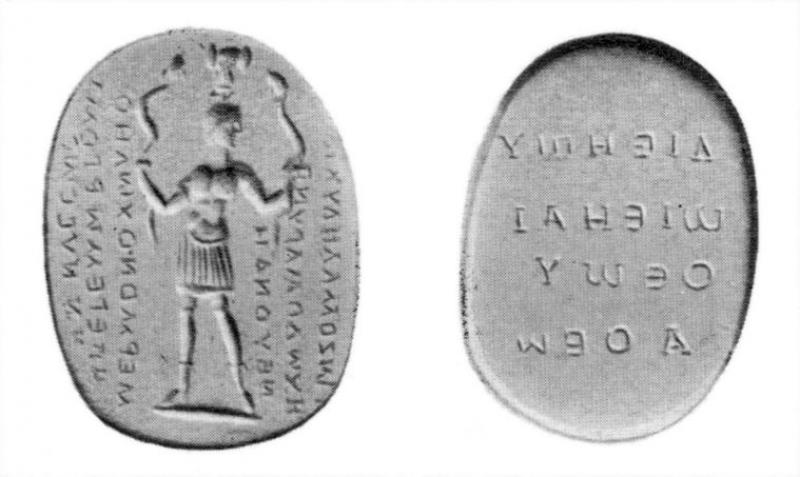 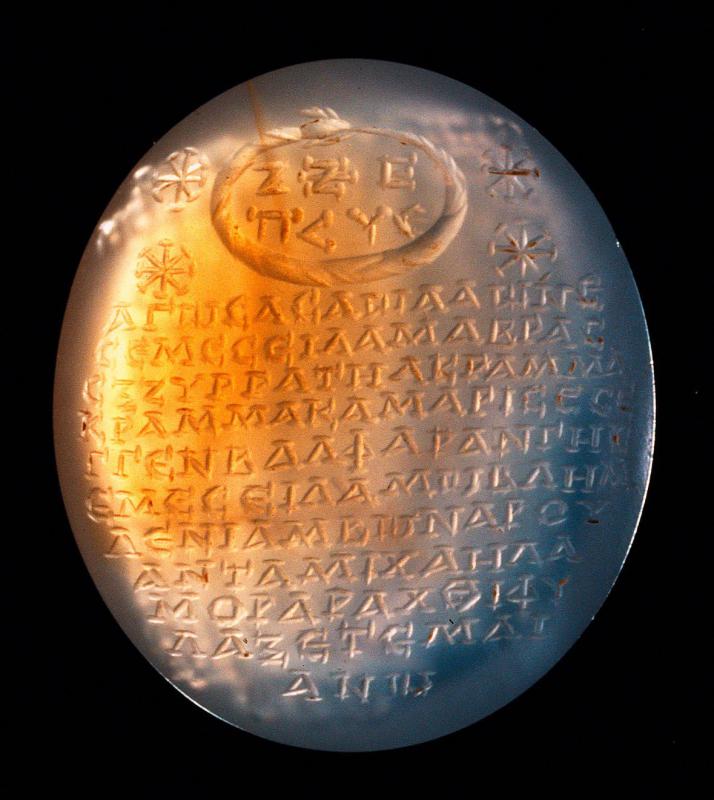 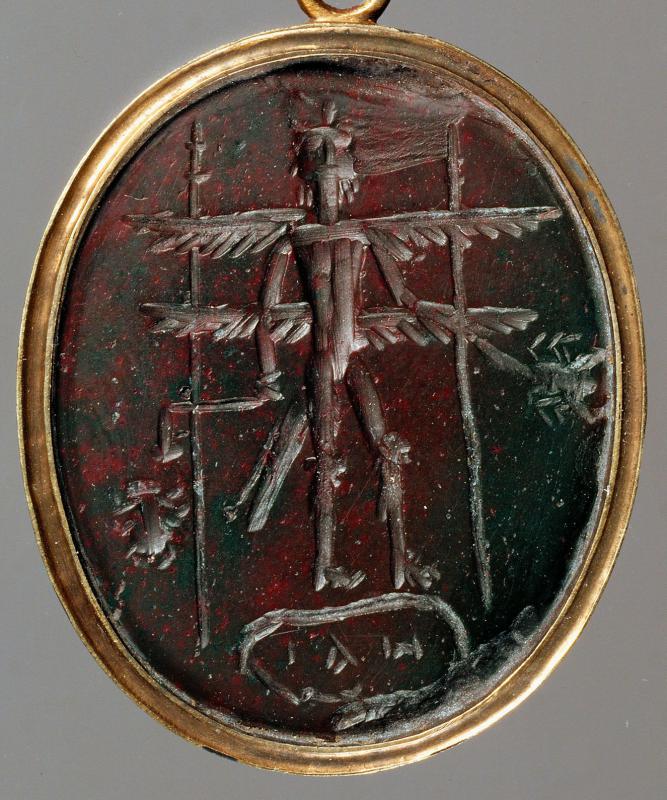 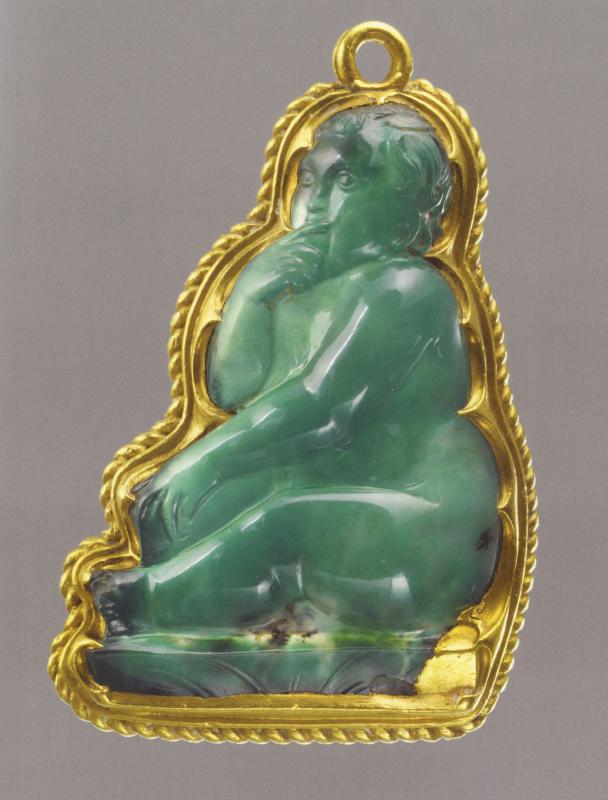 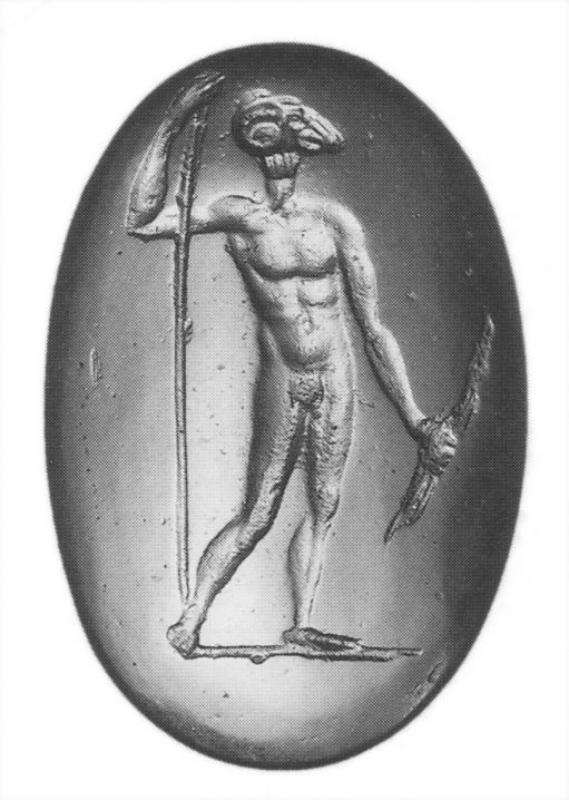 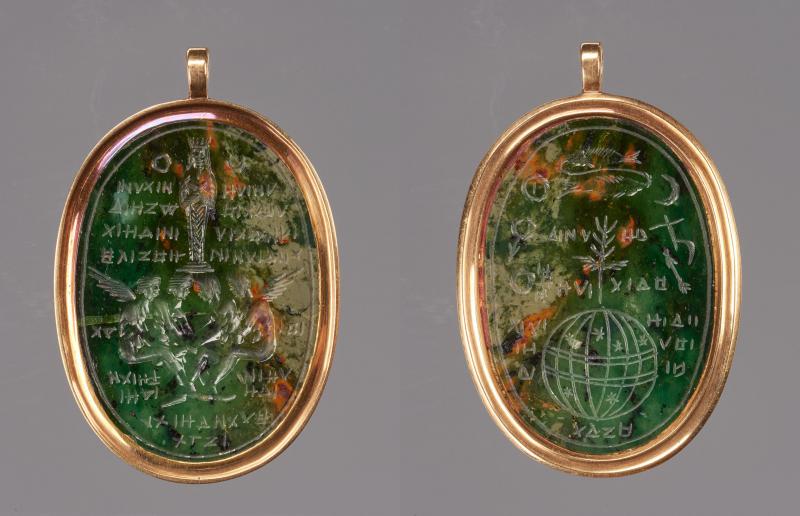